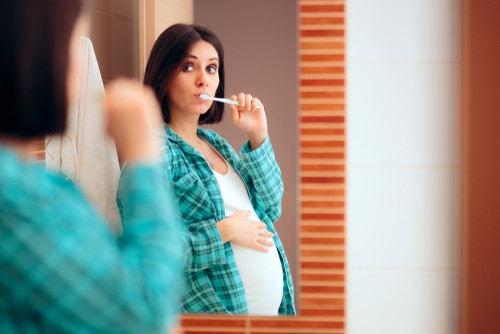 Pregnant? How Your Woodlands Dentist Can Tell

Is your family going to grow in size? Did you know that your dentist could potentially be one of the first people to be able to tell? The issue heated up recently following a post by a user on TikTok, and many people (primarily women) were shocked by this revelation leading to a closer look at their gums.

Let your dentist in The Woodlands shed some light on pregnancy and its connection to your oral health.

Fourth-year dental student and TikTocker who goes by the name of @thatdentalgal_created a series of videos called “Things your dentist can tell about you just by looking in your mouth.” The post that caught the most attention dealt specifically with how a dentist can identify pregnancy simply by having you open up and say, “ahhhh.” What she shares with her followers is that dentists can look for abnormalities “not only due to the nausea and the enamel erosion but due to something called pregnancy gingivitis, which is seen in 30-50% of pregnant patients.”

She’s absolutely correct! The importance of focusing on oral health if you’re an expectant mother is because women are definitely more prone to periodontal (gum) disease and cavities. “Gums become inflamed, tender, and more prone to bleeding,” she adds.

What is Pregnancy Gingivitis?

The Centers for Disease Control and Prevention says the number of pregnant moms with gingivitis is even higher than what was suggested on TikTok. They say, “Nearly 60 to 75% of pregnant women have gingivitis, an early stage of periodontal disease that occurs when the gums become red and swollen from inflammation that may be aggravated by changing hormones during pregnancy.” HealthLine says that it’s not uncommon for pregnancy gingivitis to be one of the first symptoms of pregnancy, developing as early as eight weeks. The hormone that’s causing all this trouble is progesterone, and when the levels of it are high, there’s a chance bad bacteria can irritate your gums. As @thatdentalgal_ says in her video, all of this can lead to tooth decay, loose teeth, and pregnancy gingivitis. Gum health issues have also been linked to preterm births and low birth weight.

If you check out the comments section for the TikTok video, it’s obvious that some users were shocked and maybe even a little scared of this dental revelation. One user commented, “Okay, um, I noticed my gums bleeding like three weeks ago, but I also changed the head on my electric toothbrush. I’m freaking out now.” (She later gave anxious users an update saying she was not with child.) Other parent TikTockers were able to back up the claims made in the video and what the CDC warns, saying, “my gums bled so much during pregnancy! During my cleaning, they were extra careful because even the smallest touch caused so much bleeding!”

Please never hesitate to speak with our dentists in The Woodlands if you or someone in your family is expecting a little one. We want to ensure both parent and baby are healthy and happy. Please contact any of these Woodlands dentists for an appointment where we can answer any questions and help you!